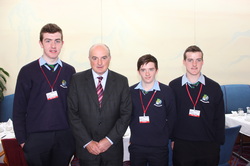 
On Tuesday the 23rd of April, three Transition Year students from Athlone Community College got the chance to become a senator for the day and ask a question of the Leader of the House in Seanad Éirinn, Maurice
Cummins.


As part of the inaugural Transition Year Student Challenge set out by the Seanad, students were required to write an essay giving their opinion on whether the leaving cert prepares you for life or an account on the challenges that face Ireland and whether their future lies
here.


Out of hundreds of entries from around the country, Thomas Hurley, Anthony O’Riordan and Hugh Allen, were three of forty entrants were chosen to attend the event in Leinster House. Ten of these forty were invited to read their speeches to Seanad.


After being greeted with refreshments in the private dining room, there was a photo call on the plinth outside Leinster House before the students descended to the Seanad chamber to ask questions of the Leader of the House on a range of issues from emigration and the economy, to the environment. The house then heard from the ten students who read their speeches to the house, five spoke on each topic.


After all this, students and their accompanying parents or guardians were treated to lunch in the Members Restaurant where they received Certificates of Excellence for their efforts in the competition.


The students had gained a wonderful experience in the Leinster House and really enjoyed their day acting as a senator in the
Seanad.