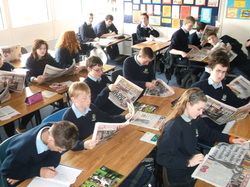 Read all about it!


Transition Year students took part in the National Newspapers of
Ireland’s new initiative‘Press Pass’ during the last two weeks.
For one week the students were sent a selection of daily newspapers.  They were able to compare the headlines chosen by the different publications, and to see how different journalists presented the same news story. During the second week, local publications were read.
As part of this initiative, students must now complete their own
article.  Some of these articles will be entered into the Press Pass Competition.
The initiative was enjoyed by students, and the articles
produced by them have been of a high standard.  Many students have opted to enter the
competition’s ‘photo journalism’ section, and the images chosen by them are both
beautiful and thought-provoking.p